It’s one-thirteen a.m. Our flight for China leaves in the eight-o-clock hour, and we’re supposed to be leaving the house at the butt-crack of dawn, five. Why am I awake?

The last week has literally been a whirlwind of non-stop activity. First, we packed up the apartment and tucked everything in a storage locker that Noelle’s parents are sharing with us.

(Me standing in our empty Apt. Goodbye, Apt!)

And this past weekend we had two going away parties which were a blast. Again, Welly’s parent’s threw us one, and so did my folks. It was definitely great to see everyone before we left!

However, it hasn’t all been easygoing…Saturday, when our Visa documents didn’t arrive we started to panic a bit. You see, before we could hop on a plane and am-scray to the Orient we had to get our Visas authenticated (in person!) at the Chinese Consulate in NYC. That meant we had to drive there just to get a little stamp in our Passports that says, “Hey, these two are legitimately allowed to work in our country for a year. Back off.” Yup, more or less.

We knew the drive up there was a huge hassle and I had no clue if my car would make it there and back…She drives smooth, but she’s not great for endurance. We were hoping the paperwork would arrive Monday then, just so we’d at least be able to get over to the Big Apple Tuesday and back Wednesday night. That would give us Thur to relax.

BUT, they weren’t there on Monday, either.

We freaked a bit when the UPS lady told us the documents might not be there til Wednesday. If that was the case the flight would have to be rescheduled…something no one wanted for many reasons (my biggest reason? It would cost several hundred dollars to make the change).

They showed up Tuesday afternoon, at the end of the day. I swear we were the UPS guy’s last stop before he clocked out…

So, we left that night in my dusty Alero (I figured a dirty car would look less appealing to car-jackers or thieves..however, who would steal a gangly Oldsmobile Alero?).  Half an hour into our trip we realized the GPS Garmin had a low battery…half hour after that we realized my lighter outlet didn’t work when the GPS turned off and wouldn’t turn back on. We picked up a PA map and blazed our own (albeit mapped out) trail. Noelle drove through the night, but by about five am she’d been up almost 24 hours and had had enough. I took over. With a PA, New Jersey, and a NY map we were set. There was nothing we couldn’t do! And then I hit early morning traffic through Jersey City and I realized I really should have mounted a Gatling Gun on the roof of my car. It’s difficult to explain what the traffic is like right beyond the Jersey City toll without just copy and pasting a traffic scene from the last Die Hard movie (you know, the scene when the bad guy takes out the traffic lights and stuff?). Yeah, that’s exactly what it was like. No joke. There were charter buses squeezing into spaces that a VW beetle wouldn’t dare try, speeding Semis with no regard for any of Newton’s laws of motion, honking horns that sounded mildly like Beethoven’s 9th, and Demolition Derby rejects trying to incite their own brand of automobile anarchy. Trust me when I say that the space beyond that toll exist in a world without traffic laws.

But we made it through and to the Lincoln Tunnel.

And then we made it into NYC. 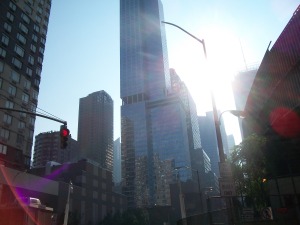 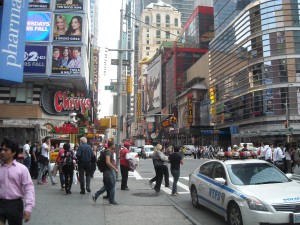 The trip wasn’t a leisurely venture, but we tried to snap a few good pics along the way. By the time we got into the city, got through the consulate, and walked around a bit Noelle and I had been up about 31 hours straight. SO, the three of us (forgot to mention that mi madre tagged along) hailed a cab, found a cheap motel, and CRASHED. 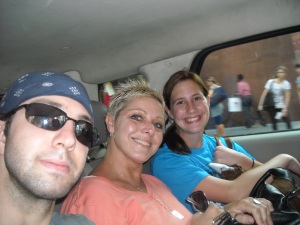 …Wow…just looked at the time. It’s after 2 am. I should grab at least two hours of sleep tonight. Maybe in my next entry I can try to describe to you the bureaucratic nightmare that is the Consulate, or the U-turn I made in NYC.

Tomorrow we leave the US. Wish us luck.