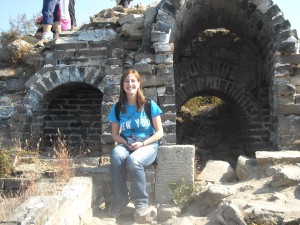 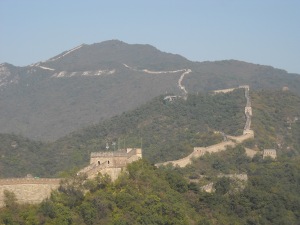 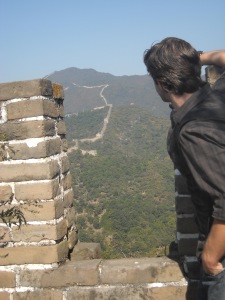 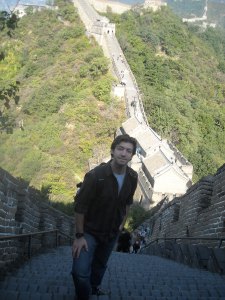 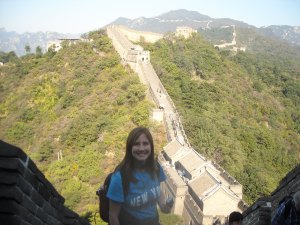 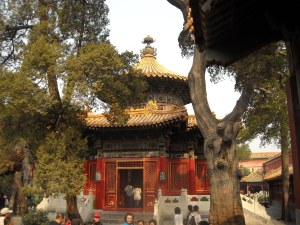 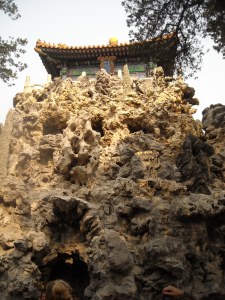 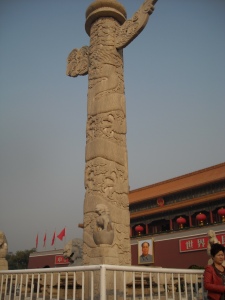 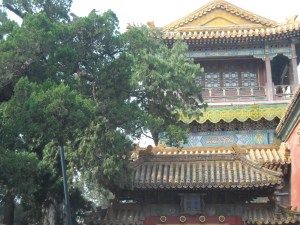 We explored the Forbidden City and snapped pictures all day, taking in the history and the beauty of the place. As they usually do in China, the hordes of people eventually got a bit bothersome, so we began walking back to the train station to make our way to the airport.

Along the way we were stopped by a man on a rickshaw (like a pedicab–a man riding a bike with a carriage on the back of it). Now, I should have known he was trouble, but alas, hindsight and all…Anyway, we bargain a price I perceive to be 30 rmb. He nods his head and reconfirms the price by showing me his fingers. All is good. Noelle and I climb in and off we go. After just a moment another rickshaw driver peddles over and makes some big commotion over the carriage being off-balance or whatnot. So Noelle is ushered into the seat of the second driver’s ride. We amble about the city, cruising along peacefully, taking in the sights–which include the rundown back neighborhoods and the darker street corners. We’re supposed to be going back to Tian’anmen Square.

My driver turns down one of those alleys that looks like it could be a stop on a murder tour of Beijing. Of course no one is around. Noelle’s ride shows up. I climb out of mine and walk over to her as she gets out. I open my wallet to pay the man. When I hand him the money he laughs. Laughs? He motions that it is not enough. The other driver, a man in his mid to late thirties, comes over. I remind both of them of our agreed upon price to no avail. Instead, as proof of their legitimacy and upstanding entrepreneurial prowess, they both rummage around in a pouch on the front of their bikes and produce a laminated card with names of destinations and prices listed on them in English. Both point to Tian’anmen Square. Next to the name is 300 rmb. Yeah, right, I tell the guy. He doesn’t seem to appreciate that at all. Both begin to get worked up as I explain to them that that is not going to happen. BUT then they manage to convey to us that since we technically took two bikes, the price is doubled. 600 rmb! It’s at this time that I’m considering seriously just knocking both of these thugs over their bikes and telling Noelle to sprint for the back of the alley where I see an open fence. All of us are getting riled up by then. Their voices are raised and they’re standing next to one another as if by doing so it makes them more intimidating. Being in a dark alley, no one around, and quite literally fenced in–they weren’t doing such a bad job. Still, I refused to pay that absurd price.

I don’t remember grabbing it exactly, but somehow 150 rmb materialized in my hand and I angrily hand it to the man just to shut him up. I tell him, “That’s it! I’m not giving you anymore!” It falls on deaf ears. At some point Noelle begins to shuffle through her wallet and for some reason is clutching onto 250 rmb. Mind you, she’s not holding it out or anything. It’s very much still in her grip and half in her wallet. But that doesn’t stop one of the guys from plucking it out of her hands. The money disappears into the man’s pockets faster than I can follow it. Now they have 400 rmb of our funds, 250 of which has basically been stolen, and I cannot get it back from him. My only two options are knock this son of a gun out or just tuck my tail between my legs, take the licks, and get out of Dodge. I think very hard and long on the first option. After all, I probably outweigh my driver by 20 lbs and the other one doesn’t look like he’d be too difficult to flip over his bike. As the men both continue to posture and rant in Chinese about how we’re ripping them off the red I’m seeing dissipates enough for me to follow the consequences of my possible actions. Should I actually engage in a fight with these men police involvement is a likely occurrence. We’d only been in China a few weeks at this point, but I’d already heard horror stories about what THAT could be like. Granted, that was a far-fetched idea, but as a foreigner you never know. Then how would that call go? “Hi, Mom. Uh, can you send me bail money? I’m in Chinese prison.” Right.

In the end, after no small amount of yelling, I tell Noelle to start walking toward the fence. They try to stop us, but I swing around and make a sweeping, finalizing motion with my hand. “Enough, dang it!” the move says. Admitting defeat, or just realizing that they can’t shake us down for anything more, both men wave their hands at me dismissively. We leave the alley.

In a display of what I can only think of as Karmic balance or Cosmic Slap-stick, right after we make our way from that alley two strangers help us find the right train station, give us accurate directions, and wish us the best.

Later, as our plane is taking off, I think back to the Red Lantern Hostel. I think of Fiona, the Scottish lawyer we met. She had been caught in a scam just two days ago. Around Beijing it’s known as the Tea Scam. Without understanding the particulars, the scam seems to involve several people: a group of seemingly nice strangers that take a foreigner into a tea shop for a cultural treat, and the tea shop workers themselves. The foreigner will be given some boxes of tea–continually told how cheap they are–and then sat down to enjoy a traditional “tea show” (whatever the heck that is) that depicts ancient methods of tea things I guess. After it’s all said and done the foreigner is given the bill. Taxed wantonly, put together like it’s some sort of intercepted WWII code, and misdirected as if the whole ordeal was done by magician, the receipt leaves the foreigner flummoxed and close to tears. What was once of minimal cost has now nearly broke her.

As we climb higher into the air I think about how upbeat Fiona seemed as she retold that horror story. She lost more than a thousand rmb and she still remained in high spirits, and 400 was dampening mine. By the time the plane landed in Dalian I resolved to look at it as a learning experience. After all, in every movie the protagonists get swindled at some point, right?

Learn and move on.

I just didn’t think we’d get another opportunity to grow so quickly.

As we walked through the lobby of the terminal a man in a leather jacket catches our attention by asking if we need a ride in a cab. We’ll, yeah, we do, we tell him. This didn’t seem as odd then as it does now, ok. Keep in mind that the main mode of transportation is by cab. There’s a whole line of them out front and we thought, hey, it’s pretty lucky that we caught this guy instead of having to stand in line.

So we follow him through the lobby,  out through the back door and down a dark stairwell. The whole time Noelle and I are looking at each other with that look. At the bottom of the steps I stop the guy and haggle price. He wants 200. Out of the question. I explain to him that even though it is National Day holiday, our ride to the airport a few days ago was only 80. I don’t budge. He relents, but does so in a way I can’t quite feel good about. He points to each of us, himself included, in turn and then holds up his hands to indicate 80. Does that mean 80 all together or 80 each? I breathe this concern to Noelle as the man leads us out into the lightless parking lot. He motions for us to stay here while he goes and gets his car. Um, ok. If this guy is a cabbie why would he park out over here? Noelle and I quickly decide that we’ve been screwed around with enough for one day. As the guy stops in front of a black sedan we make our decision. That’s not a cab and he’s not a cabbie. We run toward the front of the airport, to where the crowds are gathering around the long line of actual cabs. We merge into the thick of it and watch as the would-be driver inches along behind us, slowly scanning the throng of people.

Eventually we get into a legitimate cab only to pay 100 rmb! BUT at least with an actual cabbie you get a receipt and that can be reimbursed by the school. When we get back to Kaifa Qu we both experience a sudden appreciation for the small town within a city. We get some cheap dinner and then head back to the apartment.

Vacation is about over and the start of our first real work week in China is about to begin.

2 thoughts on “Beijing and the Great Wall: Part 2 [better late than never]”