Don’t let that fool you; I have no idea how to go much further than simply greeting someone. And to boot, my accent and intonation probably hits the native Chinese ear like some of the more colorful caterwauling of past Idol rejects. Will that deter me?

Noelle and I have been here exactly…um…(counting the days out on my fingers) SIX days. Yes, somewhere over the pacific we lost about twelve hours, but I’m almost positive it was Saturday night when we arrived here in Dalian (the trip threw off my internal clock!). This week has been packed with a ton of new things. Honestly, when just walking around your block kicks you in the teeth with culture shock then it’s safe to assume that in the course of a week there are innumerable quantities of learning afoot.

Some of the learning–most of it–doesn’t take place in a classroom.

Yesterday Noelle and I met one of our supervisors, Miles, at the front gate of our apartment around 7:30 am. The three of us walked to the light rail (walking is basically the only means of travel for us–well, that and cabs, but the traffic here is quire literally insane or just off its meds, very worthy of a separate entry) and headed for downtown Dalian. Dalian splits up into three main parts: Downtown Lushunkou District (DT), Kaifaqu (KFQ-pronounced Caw-fa-chew), and Zhuanghe Distric to the NE of the peninsula. Once there, an Eastern teacher (ET) from the DT school traveled with us to one of the area’s hospitals for our “body checks.”

I wish I could have taken pictures. I swear, this “hospital” was the most unnerving thing I’ve experienced since getting here. Let me just say that there are many high quality institutions that dabble in the fine art of practicing medicine all over China. I’m sure many of the world’s brightest minds can be found in some of these facilities. I’m just not convinced any of them would be at the hospital we visited.

We walked into a dimly lit off-white building with water and rust stains along the walls and ceilings, several men smoking throughout the halls, and lines of patients (I think) bunched up against windows, awaiting their turn to register with the very young looking nurses. Then we were led by our ET down more dim halls to another nurse, this one older looking, sitting behind a table with plastic, thimble-sized cups to her right. We gave her our paperwork and she handed me one of the lidless cups. Once in the bathroom flashes from the first Saw movie kept coming to mind. Tiles were broken on the floor, rust clung to every metal surface like bad facial hair on English majors, the pipes beneath the cracked sinks looked more than a hundred years old, the windows were busted and had bars on them, old mops scowled at me from the corners of the room, and I swear a skeleton could have been stacked between some of the old construction supplies to the left of the stall. It’s pretty sad that the nicest element to the hospital’s bathroom was the hole in the ground where you do your business. Needless to say, I passed on that particular part of the body test, at least until I could muster up enough courage to brave contracting tetanus.

We waited in three other long lines until we had both received an X-ray of our chest, an EKG, blood pressure test, blood test (I witnessed them unsealing new needles each time, thank God!), and a sonogram. Yeah, they laid me down and made me pull up my shirt so they could slop some of that goo on me. Gotta tell you, never thought I’d get a sonogram test done. I kept fighting the desire to ask them if it was a girl or a boy.

Oh, and privacy? Not so important if you’re a dude there. As the nurse is wiggling that darn sonogram thingy up and down my stomach and chest a handful of curious Chinese, Indian, and South African patients take that moment to just have a looksee at the American. From what she tells me, Noelle had a similar experience, so at least it wasn’t just my bad luck. Good thing I’m not that self-conscious! Eventually we do make it out of there with all the necessary stamps (the Chinese stamp everything to authenticate it) and a clean bill of health.

The hospital aside, Dalian, or more specifically, the area we live in, Kaifaqu, is beginning–slowly–to feel like homeish. We’re getting to know the streets a bit better and after work tonight we managed to make a successful grocery run AND get Noelle a street-merchant purse that we haggled for. The girl wanted 75 RMB but Welly got her down to 55. That’s about 10 US bucks. Ignoring the fact that just after our purchase the merchant and another girl shared a laugh while throwing looks in our direction, I think Noelle made out O.K.

Tomorrow is Saturday, but here Sat and Sun are actually our long days at the school. We have to be in by 8 am, so I’m going to toss some pictures up here and hit the hay.

It’s sold in a box…and you can find it in aisles near soft drinks…. 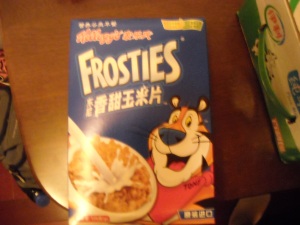 One of my favorite cereals has a different moniker here in the Orient!!

I’m trying to get some nice shots of the area we’re in, but, as it turns out, I’m not much of a photographer. I”ll keep at it though!

One thought on “Frosties: They’re Grrreat!”